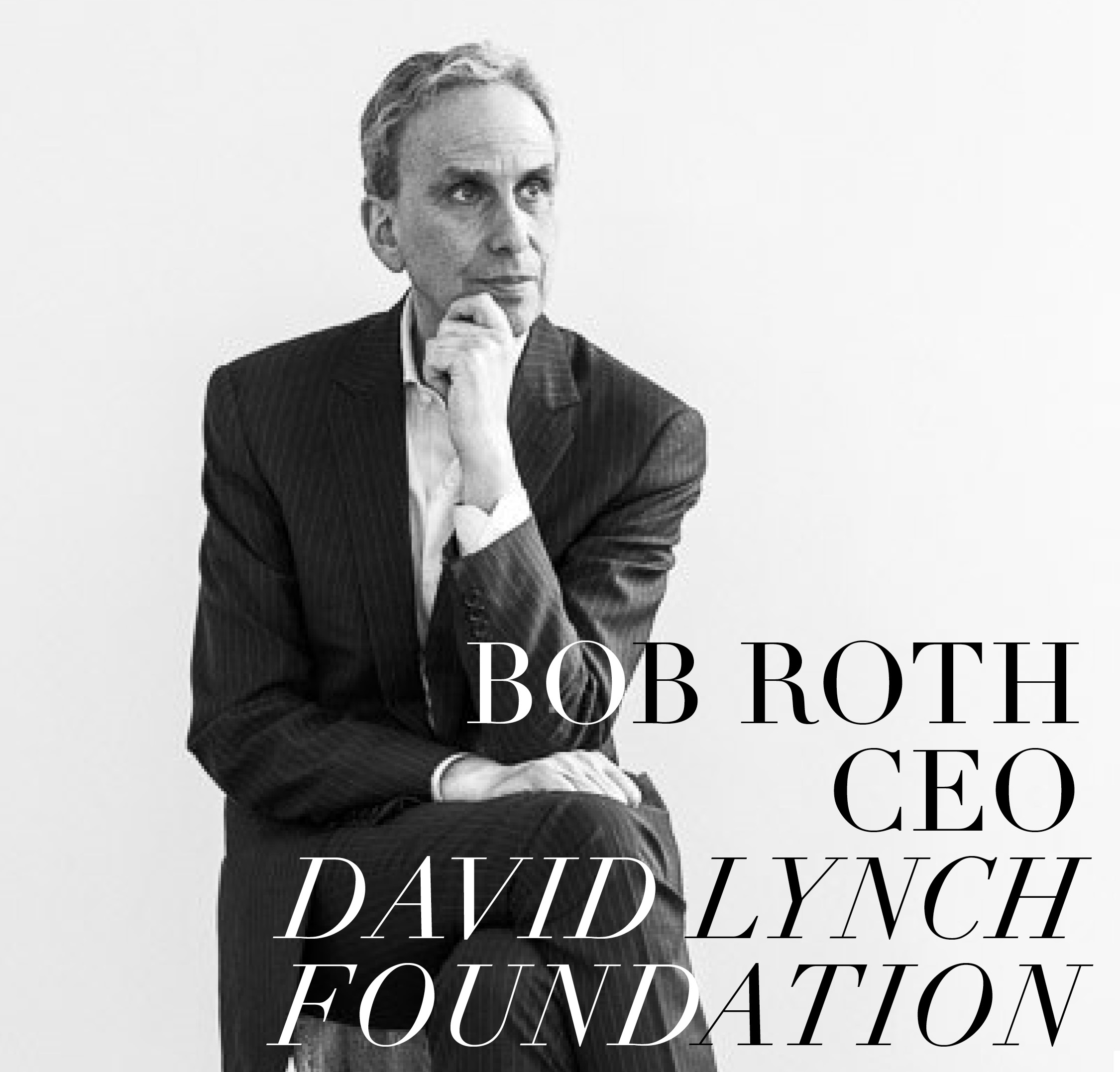 01: A CALM IN THE STORM: Transcendental Meditation, Bob Roth and David Lynch Foundation

I learned Transcendental Meditation over a decade ago, and haven’t missed a single meditation ever since. Twice a day, every day. It’s the foundation that keeps me grounded and on the front lines of consciousness.

I was going through a very challenging time in my life and had tried many healing modalities but nothing relieved the angst I was going through. Serendipitously, a friend gave me the gift to learn TM with the EXTRAordinary Bob Roth. The first day I learned, it was as if I took a magic pill. All the pain and even the depression I was experiencing literally disappeared. TM has been an essential part of my life ever since. After sharing the profound benefits of this technique with so many influential people in my community, I was appointed Senior Advisor of the Fashion Industry and the Arts for David Lynch Foundation, whose mission is to eradicate the epidemic of trauma and toxic stress in at-risk populations through teaching Transcendental Meditation (TM).

Bob has taught TM for the past 45 years, having studied with Maharishi Mahesh Yogi. He serves as CEO of the David Lynch Foundation which he created with the filmmaker to bring TM to at risk adults and young people including veterans with PTSD, inner city school kids, women who suffer from domestic violence. Bob also directs the Center for Health and Wellness, bringing meditation to companies, government organizations and non-profit groups. He’s the author of Strength in Stillness, and host of the podcast Stay Calm on iHeartRadio.

NB: I’d tried many meditations before TM but I always felt other practices were difficult to stick to. What is it about TM that differs and makes it so easy and effortless?

BR: Other techniques can involve concentration or control of the mind. They have a bit of a negative attitude towards the mind—that your mind is a monkey, that it needs to be corralled, coerced, or even wrestled to the ground. The perspective of TM is completely different. Here we see the mind not as a monkey but rather in genuine search of something more. In TM we give the mind that experience of something more, our own inner quiet self, and the mind naturally goes there. And with that comes an entire constellation of neurophysiological benefits that last throughout the day.

NB: How does one learn TM and what is the daily practice?

BR: TM is always taught in person, one-to-one, from a trained TM teacher. It takes about one hour a day over four consecutive days to learn. Once you finish the course you have access to a lifetime of follow up from your teacher, or any certified TM teacher. The practice is done for 20 minutes, twice a day; once in the morning before breakfast and again sometime in the afternoon or early evening, ideally before dinner. Click here to learn.

NB: How does TM decreases stress, anxiety, depression and trauma and how does it boost your immune system? What is the science behind it?

BR: There have been more than 400 studies published in top scientific journals that show that TM produces a unique state of profound physiological rest while the mind is settled inside yet wide awake. This rest allows the body to heal itself, to reboot and re-energize itself. Research shows that TM reduces the stress hormone cortisol by 30 to 40 percent, whereas during a good night’s sleep, cortisol levels only drop about 5 to 10 percent. Also, there’s an increase in serotonin, the so-called “happiness” neurotransmitter, as well as a calming of the amygdala, the “fight or flight” center of the brain, which gets hyper-aroused during moments of intensity or trauma. All of these things combined strengthen the immune system so that we are healthier and get sick much less often.

NB: How does TM ignite one’s creativity and imagination and how does that effect productivity and decision making?

BR: The creative process involves both the ability to focus, which is the executive control network, and the ability to innovate, which is the default mode network or, as it often called, the imagination network or “genius lounge.” This is the area of the brain where nonlinear, innovative ideas bubble up to the surface. Stress and fatigue actually shut down both networks. Brain research shows TM wakes both networks so that each network functions fully within itself and also in harmony with each other. That’s the key to creativity and imagination. These networks are like brain muscles that get naturally and effortlessly exercised during TM so you can have the creative insights that can propel you along in your career but also make your personal life so much more satisfying. Without good ideas and without the focus and energy to put those ideas into practice you will stagnate—and that is a waste of life.

NB: TM has attracted such diverse walks of life from Ray Dalio, Martin Scorsese, Jerry Seinfeld, Oprah Winfrey, Lena Dunham, and Russell Brand to at risk populations. What is it about TM that is accessible for all?

BR: I appreciate TM because it’s so universal. It’s easy to learn, enjoyable to practice, and does not involve a lifestyle or a philosophy. There’s nothing to believe in, so right there, no one is left out. The technique is being used widely in companies, on military bases, in public and private schools all over the country, etc.—for good reason. Many studies have found that meditating students get better grades and have higher graduation rates than non-meditating controls. A recent study conducted found that meditating teenagers attending schools in the most violent neighborhoods of Chicago had 70 percent fewer arrests for violent crime than non-meditating students. And research on veterans with PTSD showed that TM was in many ways more effective in reducing symptoms of PTSD than the gold standard treatment offered by the Veterans Administration. Like diving into a pool, in TM you learn how to give the attention of the mind an inward direction and automatically your attention settles down, easily, effortlessly, and gently because deeper levels of the mind are so much calmer, more satisfying and peaceful.

NB: Well, Bobby, as you know, TM saved my life and I am forever indebted to you and The David Lynch Foundation. You are my calm in the storm, my teacher, my hero. I love you very, very much!

BR: Well, my dear wonderful Natane, the feelings are the same. You are such a deeply good, authentic, kind, beautiful and smart, smart woman. I wish you—and your amazing mom—all the absolute very best! Thank you for inviting me to be a part of your newsletter!